Serengeti National Park is the most famous park in Tanzania and Africa at large. The Serengeti has been ranked as the best national time and again by both safaribooking.com and World Travel Awards both with both awards earned through votes by both travelers and travel experts.

The word Serengeti is derived from the word ‘Siringitu’, a Maa word that literally means “the place where the land moves on forever”. It is sometimes translated as the endless plains. The Maa language is the language spoken by the Maasai People (also spelt as Masai); a world-famous Nilotic speaking tribe, who occupy plains in Kenya and Tanzania. They Maasai are well known for their colorful cultural dressing, and beaded jewelry, cattle rearing and their warriors who in the past used to kill lions with spears.

Perhaps what makes the Serengeti more famous is the annual wildebeests Migration that has been termed as the greatest wildlife spectacle in the world. The wildebeest migration starts in Southern Serengeti within the Ndutu Plains and ultimately ends with the crossing of Mara River by more than a million and a half wildebeests accompanied by more than 200,000 Zebras and 300,000 gazelles as they cross to Masai mara in Kenya. The phenomenon is what has come to be known as ‘The Great Migration’ which is one of the wonders of the world.

At Safari Desire we are constantly following the movement of the animals during the migration. We make sure that we take you where the action is taking place!

This national park is part o the larger Serengeti ecosystem that also includes; Ngorongoro conservation area, Maswa game reserve, Loliondo, Grumeti and Ikorongo controlled areas as well as the famous Maasai Mara national reserves across the border in Kenya. This ecosystem is one of the oldest on earth. It covers about 30,000 km sq, and within it there are two world heritage sites and two biosphere reserves.

The animals of Serengeti National Park

Serengeti National harbors great numbers of plain game and predators among them; wildebeests, elephants, zebras, baboons buffaloes, lions , cheetahs, leopards and so many more. The park is also reach in bird life as well as fauna. Balloon Safaris above the vast plains with an “English breakfast in the African bush, will make your visit to Serengeti unforgettable.

Serengeti National Park is a UNESCO World Heritage Site just as it’s adjacent wildlife area; Ngorongoro Crater. The Serengeti is home to some of the world’s remaining wildlife with over 2 million ungulates, and approximately 4000 lions, an estimated over 1000 leopards, and 550 cheetahs among other predators that call Serengeti home. The Serengeti also a birders haven. The park boats over 500 bird species recorded within the boundaries of this vast park that measures approximately 14,763 square kilometers. The park is located at an altitude of between 1,140 to 2,099 meters above the sea-level which is equivalent to between 3.740 and 6,886 feet above the sea level.

The word Serengeti is derived from the word Siringit a Masai word that means endless plains. True to the name, the vast area in Serengeti Savanna grasslands. The Savannah plains makes a good habitat for the thousands of ungulates that call Serengeti home but also perfect hunting ground for the predators mainly the big cats. Serengeti in general is dotted with several Kopjes which are basically outcrops of granite rocks where lion prides can be spotted as they prey on the antelopes on the plains.

The Central Serengeti is mainly plains, while the western corridor is made up of hills and valleys with forests and woodlands. The Northern Serengeti from Kogatende towards Bologonja the area is hilly and rocky.

Generally, the best time t0 visit Serengeti for safari is in the dry season between late June and October. The Serengeti National Park is an all-year-round destination. The park offers incredible wildlife viewing opportunity from January to December. During this time the grasses are shorter and therefore visibility better. This is the time when you can do the most rewarding game drives in the Serengeti.

Depending on what you wish to see in the Serengeti, the best time to see migration in the Western Corridor in the Grumeti river is between June and July. 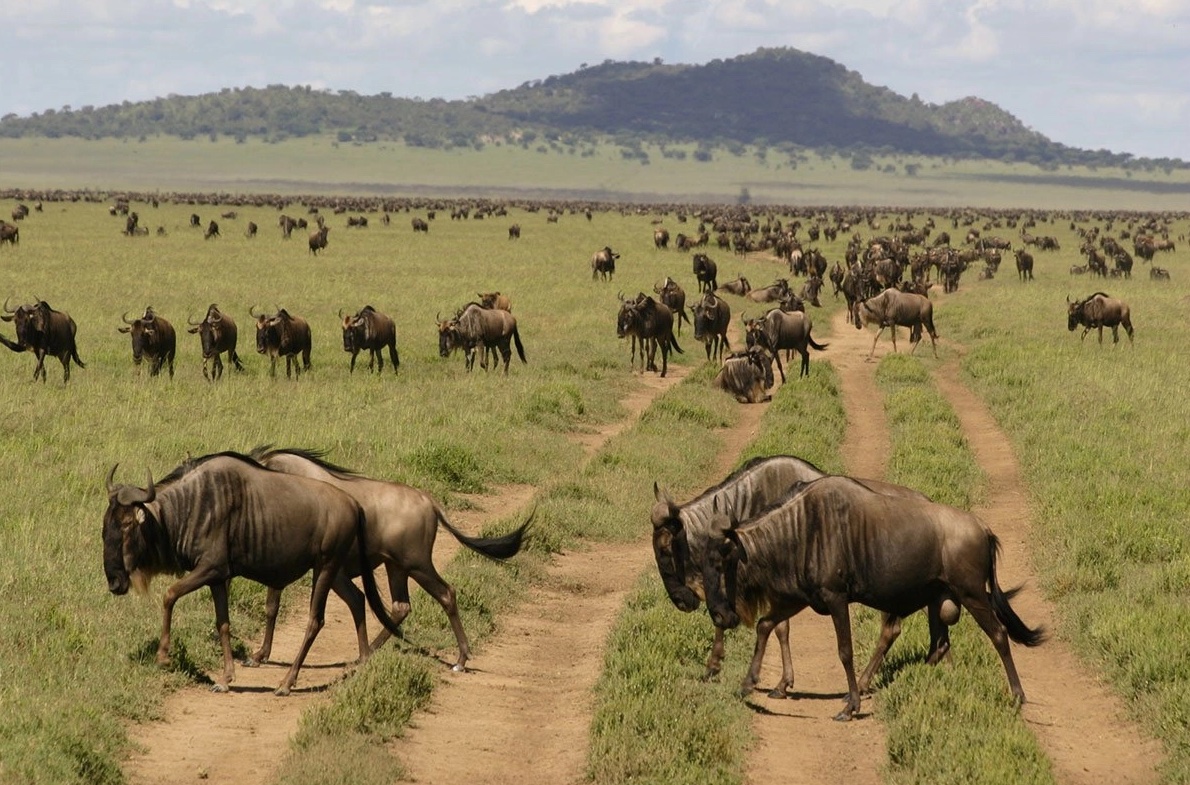 The herds then move from the Western Corridor towards Kogatende in Northern Serengeti and ultimately cross the Mara River between from August to September, going in various groups / batches. If you are hoping to catch the wildebeest migration at the Mara River, your best bet would be to travel within those months of August and September.

If you would like to witness the calving and breeding of the Wildebeests in the Serengeti then, the best time to visit Serengeti for the calving season is between February and March every year. The herds concentrate in Southern Serengeti including plains the south of the park as well as Ndutu Plains which administratively are located within the neighboring Ngorongoro Conservation Area.

There are 3 major safari seasons in Serengeti; the Low season (also Green Season), the High Season and the Peak Season (dry Season). When it comes to accommodation however, many lodges and camps categorizes the seasons into 4 Seasons.

1. The Peak Season – which includes July to October, and December 21st to 05th January

2. The High Season that includes January to March

3. The shoulder season which includes the month of March and November

Weather in Serengeti is normally moderate and pleasant throughout the year. Serengeti is known for great sunrise and sunset pictures and while the days can be sunny and a bit hot, it never gets extremely hot. The blowing winds cools the park during the day but during the evenings and early in the mornings; it can be bit chilly. This is why we normally recommend that everyone must park a jacket or fleece which can come handy during those times for staying at the bonfire in the evening or during the early morning game drives.

The wet season in the Serengeti just as it is for the greater Tanzania is divided into two rainy seasons; the short rains and the long rains.

The short rains season occur between October, the month of November and up to mid-December has an average of 26 Degrees centigrade / 79 degrees Fahrenheit as highs and lows of 15 degrees Centigrade / approximately 59 degrees Fahrenheit. It rarely rains the whole day, and mornings are mostly sunny and warm, with showers and sometimes thunderstorms at night.

The long rains season starts any time from mid-March up to end of May. During this season the rains can be heavy and sometimes floods are experienced in a few notorious areas. Some roads can be very muddy and sometimes rendered impassable which makes it important to follow the advice of the safari guides at all times, because they know all the notorious spots and alternative routes.

In general, the rains rarely fall for the whole day, although sometimes we experience some very cloudy days during this time. Safari game drives go on despite the rains and most large groups take advantage of the green season rates to operate safari tours during this time at a great price while staying at some of the best standard luxury lodges and camps. 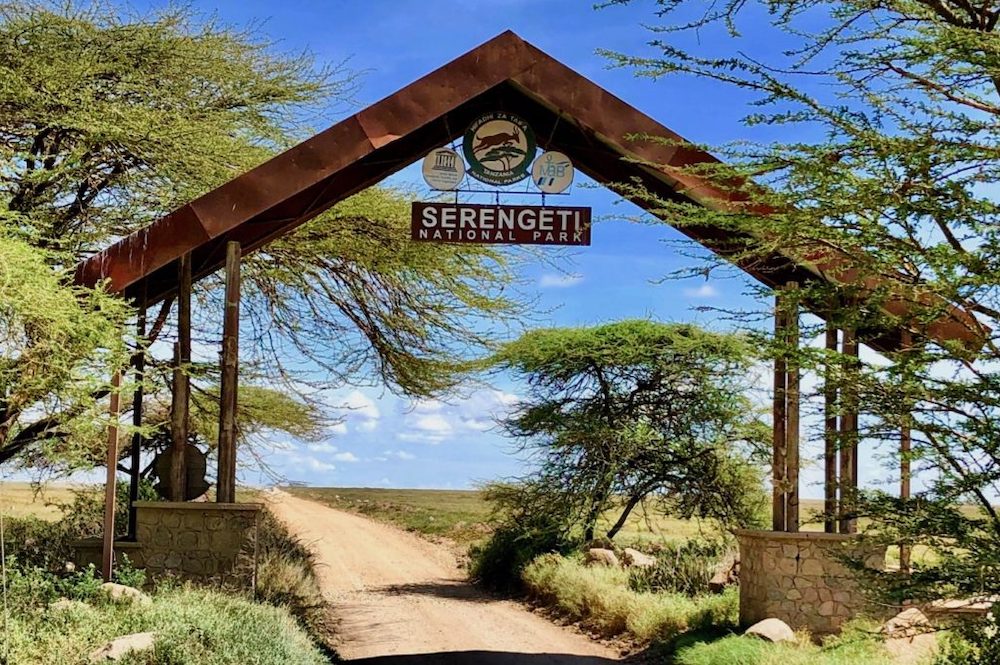 How to get to Serengeti National Park

The best way to get to Serengeti is to fly into Kilimanjaro International Airport which serves Arusha town; the base town for most safari tours in Northern Tanzania. From Arusha town you can catch a domestic flight into Serengeti or can drive a road; a long drive that takes around 7 hours through the Ngorongoro Conservation Area.

Several airlines plight the route from Arusha to Serengeti (different airstrips). These include the Coastal Aviation (one of the oldest companies), Regional Air and the new companies which have entered the market but doing well; Auric Air and Flight link.

Although Dar es Salaam is on the mainland Tanzania, it is not possible to drive to Serengeti because of the extremely long distances so it doesn’t make any sense driving. From Dar es Salaam to Arusha alone it is a 9-10 hours’ drive. With a further 7-hour drive from Arusha to Serengeti, that journey is unthinkable.

Feel free to get in touch with our safari experts for free advice on how to take a safari in Serengeti National Park or how to include the Serengeti in your longer safari package in Tanzania.